This post is from a series of posts about writing a small application in Rust to display information about a particular git repository.

I have finished at the MVP stage (part 1) of the prompt after adding the logging (part 2) so in this post I summarize the rest of features:

At the moment we have a simple program that can print a branch name into the stdout. It does provide some information, but it is nowhere near the desired outcome.

If we look again at the example I have given in [part 1][part-1] of the series, we have information about the current repo index status, such as:

These are quite useful things to know when one is working on a project stored in git and that is what we are going to implement next.

I have done some refactoring since the last time and the overall program now looks as follows:

The idea is to encapsulate all of the logic of constructing the status in one function and main is only responsible for the interaction with the outside world.

Some notes on the data

It is important to note, that when we receive the status of the files in the git repository, each item in the list may have multiple flags associated to it. For example, we could have staged the changes in a particular file (e.g. main.rs) and then modified it and then I would expect the status to show, that there is one staged file and one file that has modifications. That is why we should not think that the sum of all changed items in the status list is the sum of items that have been changed.

I am going to take some inspiration from Olivier and define them as:

The implementation is not one of the most succinct, so I'll spare you from having all of it inline, especially since I have outline the main things how it is going to be structured.

I still need to implement some way to have branch status and after some thinking I decided to go with the following approach:

Thus the result should look as:

Let's use the repository state and implement the last part of the list by creating a function which maps the state to a string:

As you see, we want to return the state of the branch, if we are doing something special on not do anything else. The only odd thing about this is that rustfmt is formatting the code in an interesting way for the cherry-pick case, but I can live with this.

Up until now everything was white on black on my terminal. This means that it may require more time to quickly notice the state of the git repo. That is why I decided to use the colored crate, which makes it very easy to define color schemes by using simple names of the colours. I also hope to expose this as a configuration parameters for the user.

However, fine-tuning of the defaults may require some tinkering and that is why I decided to write some helper routines, which would print me some examples. For that I implemented a naïve random data generator using rng::choose. The final test can be seen below: 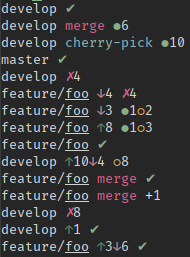 This is really useful to test happy paths and see how things look like with various data.